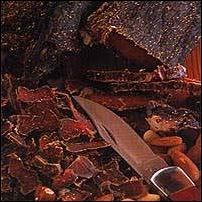 Biltong is South African dried meat. The word comes from Dutch with ‘BIL’ meaning buttock and ‘TONG’ meaning strip. Biltong has been around for centuries; for instance, a more primitive form, the Dutch tassal, was also prepared in certain areas of France during the late Middle Ages. Tassal was also made in Batavia, and made its way to South Africa with the Dutch settlers where it was adapted to the less pungent biltong.

How to Make Biltong

There are a multitude of recipes and methods used today to make biltong. Many of these are passed down from generation to generation. The good news is that it is really simple to make your own biltong, and the principles which you will use are basically the same regardless of which recipe or method you choose to adopt. One thing is sure, like many other recipes, the best biltong is made with the best ingredients.

As mentioned above, In the past farmers used a whole beef carcass for Biltong, but today the beef buttock — consisting of the silverside, topside and thick flank is normally used. The finest biltong is made from the eye muscles running down both sides of the backbone and which are cut whole from a side of beef. The most tender (and most expensive) biltong is made from the fillet.

Meat must be cut with the grain. This is because when you come to eat the final product you will cut the biltong across the grain (and tough tissue), in order to get the most tender pieces.

Meat will shrink by a large amount during the drying process. The more dry you like your biltong the more it will shrink, due to moisture loss from the strips of meat. You can roughly estimate that your end product, will yield approximately 50% of your starting weight.

Try to remove as much sinew and binding tissue as possible when you cut your strips of meat. 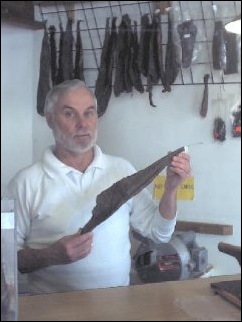 The strips of meat are then dipped into undiluted vinegar. Use red, white, or even apple cider vinegar. The vinegar ‘bath’ accomplishes a few things: It dissolves some of the sinew and binding tissue. It makes the meat a little more tender. It mellows the aroma and flavor of the meat, before and during the drying process. It causes the meat to have a dark and shiny appearance once it is dried. It opens up the pores of the raw meat, for the next step, which is to spice the meat. By doing so, the spices are able to penetrate deeper into the meat.

At this point you are ready to season your meat, and this is the step that typically distinguishes one type of biltong from another. Most people develop their own recipes for the seasoning they use on their biltong. These recipes are often passed down from generation to generation. As far as traditional biltong is concerned, you will typically see the following ingredients used in a seasoning: Salt, Pepper, Sugar, and Coarsely Ground Dry or Roasted Coriander

There are again many different methods people use to dry biltong.

Using a home-made enclosed cabinet with screen mesh sides. The cabinet has metal rods that run across the width of the cabinet, and which are used to hang the biltong from (much the same as you would hang your clothes in a clothing closet). The screen mesh allows a breeze to pass through the biltong (using an oscillating fan, as we do, you can create this breeze). The fact that the cabinet is enclosed, keeps out all the ‘bad elements’ mentioned above.

Using a home-made ‘Biltong box’. This is basically a sealed wooden box (you can use cardboard if you like). The bottom of the box houses a 60w light bulb, which is covered by a piece of wood, that acts as a barrier to separate the meat drying portion of the box from the light housing. The barrier has holes cut into it, that allow the heat from the light bulb to travel upwards and at the same time prevents the light bulb from having the juices from the drying meat drip on it. The small amount of heat helps to dry the biltong faster. The meat drying portion of the ‘Biltong Box’ must have holes in the top and preferably on all sides, which promote good air circulation.